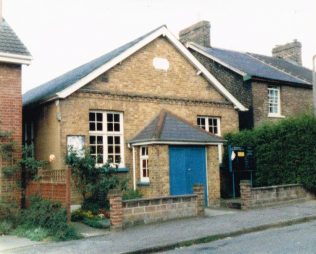 The chapel was 25 feet by 27 feet, and 12 feet 6 inches to the wall plate. Over the front door was a stone – still there in 2014 – inscribed ” Primitive Methodist chapel. Erected 1855.” “The pulpit is painted and grained, and the pews, which are capable of accommodating about 100 persons, are stained.” They even tried some future proofing: “there is a beautiful house erected (not yet completed), in such a manner that if the chapel needs enlarging, it can easily be effected. There is likewise a large piece of ground attached to the house, 30 feet by 45 feet.”

The entire cost was around £300, towards which they had raised around £85. Particular thanks were due to J. Hackblock Esq., J. Parrot Esq.,; — Alexander Esq ; — Gurney Esq.

Keith Guyler’s notes say that it was pending disposal  in 2000.  On Google Street View in June 2014 it is shown as a house and for sale.