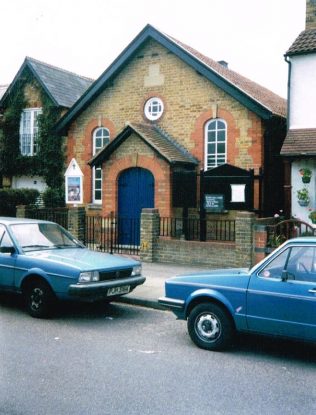 There were said to be no dissenters in the parish of Shepperton in 1766 and in 1810, though one Quaker was reported in 1778. In 1811 a meeting-place for Independents at Shepperton Green was registered.

The Primitive Methodists built a chapel in Sheepwalk Lane, Shepperton Green, in 1879 as a mission hall. It was enlarged and Sunday schools were added in 1910.

By 2012 it had become Shepperton Organic Day Nursery – “the country’s first registered Organic Day Nursery for pre-school children which opened in 2004, winning local and national awards for being environmentally-friendly, and for nursery nutrition.”