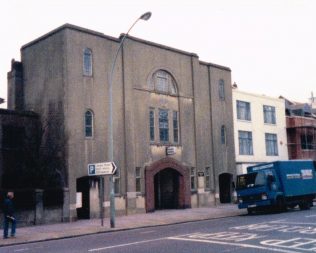 This Primitive chapel in Keith Guyler’s photograph dates from 1894/5 and was the successor to the 1882 chapel in Viaduct Road – for more information about the Viaduct Road chapel, follow the link on this site.

London Road Methodist Church was designed by London architect James Weir and built in 1894  with alterations in 1910 when a new frontage, some 4 metres in front of the original, which was left in situ and merely ‘boxed in, was added.   In 1938 the facade was rendered over original brick.

The organ by Holditch came from the Goldstone Villas Methodist Church in 1933 and the communion rail from St Margaret’s in St Margaret’s Place in 1958. There are plaques to Rev William Dinnick and Alderman Edward Lowther. The building was sold around 2006 and in May 2015 is a restaurant and arts venue. – the Emporium.