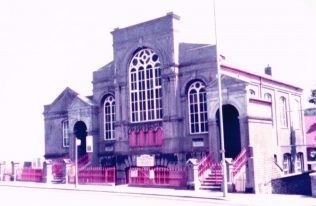 Queen’s Park Road Methodist chapel was built for the Primitive Methodists in 1891 to a design by W S Parnacott.  The building was made redundant in 1987 and subsequently became a nursery.

On Google Street View it looks much more impressive than on Keith Guyler’s photograph.  In May 2014 it is shown surrounded by scaffolding.