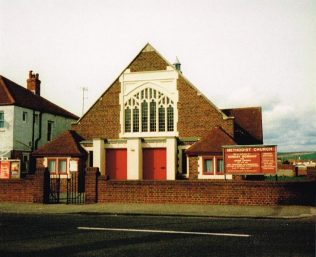 The Worthing mission was formed in 1875 and became a circuit in 1894. There was a cottage meeting in Wenban Road in 1874, and an iron chapel was opened in Chapel Road in 1880. It was moved to Lyndhurst Road in 1893, and was opened after use as an emergency hospital during the typhoid outbreak.

The chapel in Keith Guyler’s photograph was opened in Lyndhurst Road in 1929, just before union with other branches of Methodism.  It was designed by H.K. Armitage in the Perpendicular Gothic style.  The iron chapel was taken down after the Second World War.

The Methodist Church declared it redundant in 2005, and permission was granted to establish a children’s centre in it.  It Google Street View it appears in May 2014 to still be used in that way.