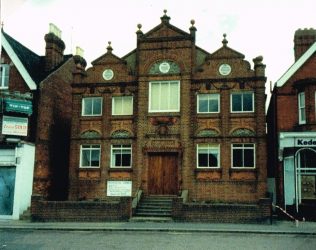 This large Renaissance Revival brick and stone chapel on East Street was built by the Primitive Methodists 1891. Previously the small society had met on the edge of the town but under the impetus of the missionary Rev RW Burnett, the chapel in the town centre costing £1,500 was built.  As it was a mission rather than an established society, donations were sought from across the Connexion: jam manufacturer WP Hartley gave £25. The Primitive MEthodist magazine describes it as having “a pleasing solidity and harmony” with “an utter lack of paltry ornamentation … (but) … no lack of handsomeness”

The chapel closed in 1932, and in 1957 Pentecostal worshippers moved in and renamed it Fellowship Hall. This continued into the 1980s.  On Google Street View in June 2014 it is shown as the Christian Life Centre.