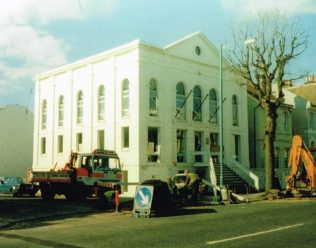 Hove Goldstone Villas Primitive Methodist chapel was opened in 1878 and closed soon after Methodist union in 1934.  The organ was taken to London Road Methodist Church.

The building became the Cliftonville Hall of the Independent Order of Oddfellows.  It was later converted into commercial use as Europa House.

The 1878 Primitive Methodist magazine contains a note of the opening of a new Primitive Methodist chapel at Cliftonville in Brighton. It was an adventurous move; the society at the time only had 16 members.  The new chapel cost £2,500 of which they had raised £1,500