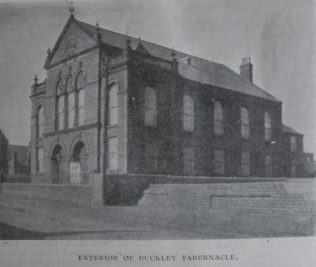 It is possible to become confused about the early Primitive Methodist work in Buckley, as there were two chapels, one known as Drury Lane (which has a post concerning it) and one called Tabernacle. The 1920 Souvenir and History of the Primitive Methodist Church, Buckley records that the movement spread to Buckley mainly from Chester. There were open-air meetings in Lane End in 1838 and occasional Sunday services in a house in the Smelt Yard. These were later transferrerd to the parlour of the Duke of York inn.

A chapel was built in 1841, and the cause grew steadily, being led by “men with burning zeal for the progress of the Kingdom of God”. One of these was Edward Davies, a man “fervent and mighty in prayer” – indeed, it was believed that his main influence was exercised in the prayer meetings. Another was a local preacher, Peter Kendrick, who died in 1892.

By 1863 the chapel had to be enlarged, and during the next decade “an atmosphere of deep spirituality characterised the activities of the church, and as the years passed by this specially revealed itself in the prayer meetings.” Sunday congregations filled the chapel to overflowing.

A larger chapel was built in 1876. In 1936 the society amalgamated with a Wesleyan society, to form Buckley Cross Methodist Church, and the 1876 chapel was demolished in 1969.