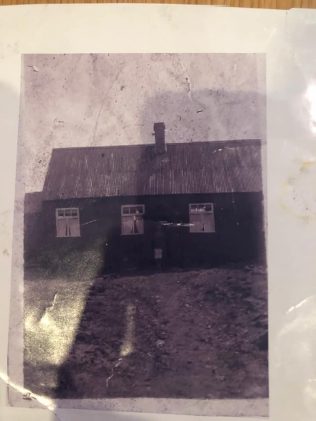 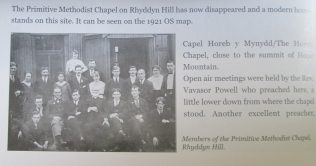 zoom
Page 74 of A History of Hope and Caergwrle by Rhona Phoenix and Alison Matthews, published by Bridge, Wrexham, 2006
With permission

The 1912 25-inch Ordnance Survey map marks a Primitive Methodist chapel in Caer Estyn at grid reference 381 575. A 92-year-old man living nearby remembers it as a tin chapel, and says it became a dwelling perhaps about the time of the Second World War.

I have not found the chapel in any old Circuit Plan. Any further information would be of interest.

Heather Tamaris Cunnah has provided the following information (May 2021):

Built in 1862 and demolished around 1982. The chapel became a dwelling place around the time of WWII and Mr Hughes resided there. Then Jim Williams, and after, Sammy the Gwastad. It was then demolished and a house built in its place next to Bryn Arthur. Some of the congregation are buried in the field behind the house that is owned by Miss Parsonage who lives in one of the stone cottages.