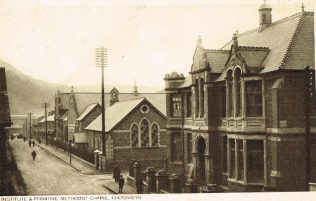 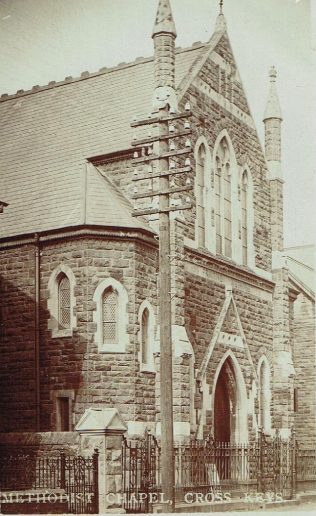 This Primitive Methodist Chapel, built about 1892, in Gladstone Street, united with High Street Chapel in 1975 to form Crosskeys Methodist Church.

Thanks to Rev David Gray for the information that the large two storey building on the right in the foreground of the first photograph is the Risca & Crosskeys Miners’ Institute. Then again on the right beyond the institute, next to the telegraph pole is a single story building. This is St Catherine’s Anglican / Church in Wales.  Gladstone Street chapel is beyond St Catherine’s. St Catherine’s is still there although I believe the Church in Wales no longer use it. The Miner’s Institute was demolished in the early 1980s.

Street View in 2009 and 2018 shows the St Catherine’s building in front of the chapel to still exist, but the chapel itself has been demolished and the site is in use as a car park.