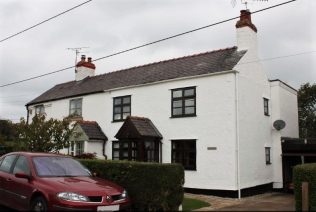 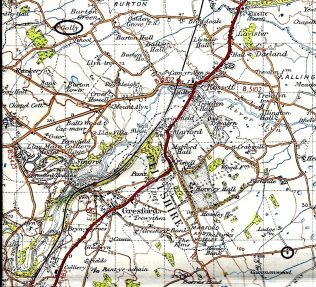 Golly is an anglicisation of the Welsh for light, and I believe the place was once known by a longer Welsh name meaning in full hill of light. Whatever the original prompt for the choice of that name, I believe the presence of a Primitive Methodist chapel would have added significantly to its appropriateness, as they worshipped him who said “I am the light of the world,” and sought to make him known to others.

The chapel was built in 1861, but has vanished, and a house – Chapel House – now stands on the site, which is at the bend in the road, beside the G on the map. I have marked it with an ellipse. Sadly, I have not – or perhap I might say, not yet – unearthed a photograph of it.

I have however spoken with Mrs Winifred Alliss, who was evacuated to Burton (the parish in which Golly lies) from the slums of Liverpool in the War. Never having seen so much as a cow before, when she arrived in this agricultural area she thought she was in Heaven!

In 1951, having married, she moved into Golly itself, when the Primitive Methodist chapel was a very real part of the community. She told me that next door to the chapel lived a Mr and Mrs Kendrick Kaye, and that it was relatives of Mrs Kaye who had built the chapel. People were poor, and walked to chapel; indeed, if you owned a bicycle you were deemed lucky, and few people owned cars. But the chapel was well attended by the farming community. Mrs Alliss particularly commented on the delightful harvest festivals, with real country produce, sheaves of corn, home-made cakes, which would be auctioned the following day. The Allisses’ son was the last person to be christened in the chapel.

Not only the chapel, but also the school and the Anglican church have been knocked down.

There was another North Wales Primitive Methodist chapel at Commonwood, which I suspect is the place of worship I have circled elsewhere on the map: I propose to attempt to verify this, and to add a post about the society there. Meanwhile, from an old Plan, I know that Golly, Commonwood, Rossett and Llay were in the Chester Second Circuit. In 1900, if the four preachers gathered at a particular spot in Chester, transport was provided for them to their appointments in Wales.