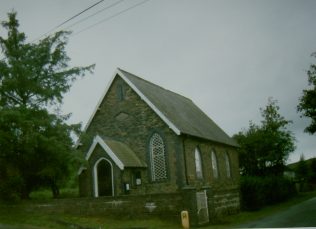 (White) Gritt (sometimes spelled with one t) Primitive Methodist chapel was opened in 1865 and at the time of Keith Guyler’s photograph in 2000 was still in use.

Shropshire online archive includes an account of camp meetings in the area with a class ticket found in a Primitive Methodist hymn book.  “Each chapel in the old Minsterley Circuit (originally 13)had its own Camp Meeting, where there were three or four preachers, standing on a lorry or farm wagon, and the congregation, singing lustily, paraded around the area to the chosen “camp ground.”  The Perkins Beach chapel in Stipersones village, the Grit chapel at the foot of Corndon and Hyssington chapel, right on the Welsh border (all in the combined Marches Circuit) have been the only local ones to continue the custom in recent years. … The Grit’s Camp meeting has a memorable location – the lawn of a house with the name of Giant’s Cave.“