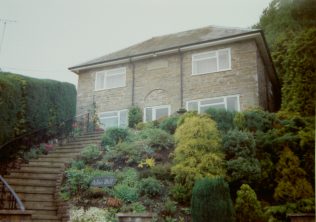 Llangunllo Primitive Methodist chapel was opened in 1853. There is an account by Charles Smallman of the opening in the Primitive Methodist magazine from 14th October 1853. Preachers were Rev C Bagley of Oswestry and after the tea meeting C Smallman, J Broadhurst and E Cowdell.

The chapel measured 30′ x 21′, built of stone and slate, and cost £115 of which they had raised over half. Mr Evans of the Bailey gave the land, but there was considerable interference by the local clergyman who intervened to prevent several agreed land deals being completed.

Powys: a day in the life gives details from the notebook of the Rev Rose about the chapel in 1891 and two families that attended – Vaughan and Griffith (“kind people near the station”).

The chapel was closed in the 1960s and at the time of Keith Guyler’s photograph in 1993 and on Google Street View in July 2011 was in use as a house - Robin Hill.