in the Chester Primitive Methodist Circuit 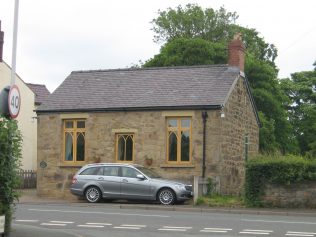 This chapel was opened in August 1836. You can read a bit more about it in the 1837 Primitive Methodist Magazine (page 238). {Ed’s note: In the magazine James Garner tells us that the chapel, measuring 18′ x 23′, was situated on top of a hill with a scattered population. They were obliged to Mrs Elli for her kindness and liberality and to Mr. J Tilston, her nephew, for collecting and obtaining favours}

At one time the Lord blessed the visit of a missioner from London, a Mr J. H. Cooke, who conducted a three-week mission. He was the guest of Mr and Mrs Cheers, who lived at a farm near the junction of Smithy, Dark and Higher Lanes. He preached every night, and during the first two weeks over a hundred people professed faith. Sadly, as happened even in our Lord’s ministry, a number of these eventually backslid and ceased to attend meetings.

The chapel (as you see) is now a house. But a quarter of a mile away is a Baptist chapel where I sometimes preach the same old Gospel message as I believe the early Primitive Methodists preached so nearby, nearly 200 years ago.