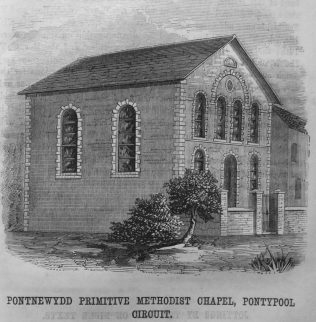 Transcription of Article published in the Christian Messenger

PONTNEWYDD is a pleasant village in the parish of Llanvrechva, in the county of Monmouth, beautifully situated by the side of the Eastern Valley’s railway, near midway between Newport and Pontypool. The place was missioned by the Primitive Methodists in the summer of 1862, and a small church was formed, who worshipped in an uncomfortable room. When the Rev. C.T. Harris was on this circuit he took steps to secure land on which to build a chapel, and succeeded in obtaining an eligible site from Miss Jones, a generous lady, who owns considerable property in the place. A trust was formed, and the land (which is freehold, and was given by Miss Jones) was conveyed to the Connexion according to our new form of title deed. Thus the course was clear to begin to build as soon as funds could be raised for the purpose.

In August, 1866, plans and specifications were prepared, sanction of the building committee was obtained, and the foundation stone of the beautiful structure that stands at the head of this article, was laid by G.F. Grice, Esq., who put £5 on the stone, and delivered an excellent address. The Revs. J. Best and T.T. Shields gave addresses, and a collection was made amounting to £10 18s. 7d. The chapel was opened for divine worship on Sunday, April 14th; the Rev. J. Best preached in the morning, and the Rev. C.T. Harris, of Bristol, in the afternoon and evening. The weather was very rough and wet, but the congregations were good. Collections for the day, £7 6s. 11d. The tea meeting on the Monday following was well attended, and realised good profit. On April 21st, the Rev. T.T. Shields preached morning and eyening, and the Rev. John Williams (Baptist) in the afternoon. The day was wet again, but the services went off well. Collections, £5. The choir did good service. Two things have made much against us; the one was that both the Sabbaths were very rough and wet, the other was a strike in the ironworks in the neighbourhood at the time of opening. Mr. C.H. Parfitt was the architect and builder, and the manner in which the work is executed does him great credit. The entire cost is a little over £300, towards which one third will be raised.