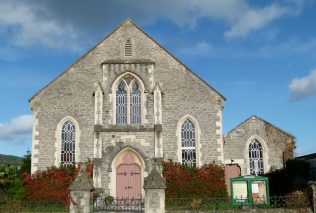 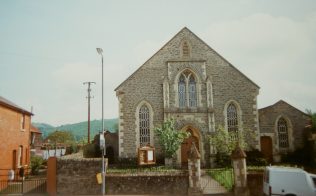 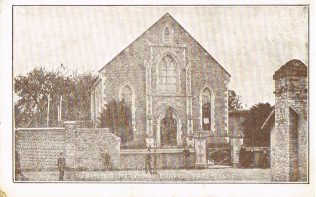 In the mid 1820’s a society of 40-50 members was formed at Presteigne, by missionaries from the Darlaston circuit.

The town of Presteigne is surrounded on three sides by Herefordshire. It was the county town of Radnorshire when society started, so perhaps it was chosen to allow the outward spread both into North West Herefordshire and East Radnorshire.

There are details of the opening of the first Chapel in November 1833, but not its location. A Chapel was established in Harper Street, which may have been the first location. It was certified on 10th July 1847 for the solemnization of marriages.

At some stage it was proposed to relocate. Tenders were requested for the erection of a Primitive Methodist Chapel and School Room in an advertisement in the Hereford Journal Weds 29th June 1859.

The corner stone was laid on a very stormy and cold Easter Monday 1860, reported in Hereford Times Sat 21st April 1860.

The wall plaque stones state “ (upper is now blank) – Methodist – Chapel – AD – 1861”. It would appear that the raised lettering “Primitive” in the upper stone has been removed or could have weathered off. The date is 1861, but others have taken it as 1867 due to the numeral style.

The adjacent hall to the East has a wall plaque with a date of 1888. Thus was the tender 1859 too expensive and the School Room was delayed.

In 2013 this an active Methodist Church which is part of the Southern Area of the Shropshire and Marches Methodist Circuit.

Location:- Set back from the street with a walled and railed forecourt.

On the 1889 OS Herefordshire 1:2,500 map the building is marked as Methodist Chapel (Primitive)

On the 1928 OS Herefordshire 1:2,500 map the building is marked as Primitive Methodist Church.