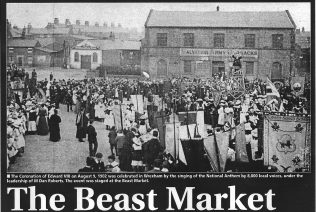 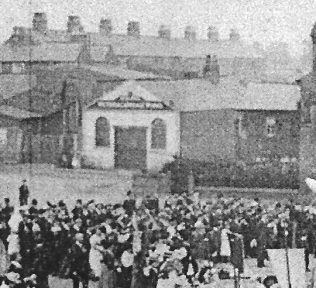 A photocopy of the photograph was sent to me after I gave a talk at a Baptist church in Wrexham on the ministry of John Ride, the Primitive Methodist minister who was the first to ‘open’ Wrexham in 1821. This led me to the Wrexham Leader, who kindly found the original article (from 2nd November 2010) and printed it out for me. The photograph was taken on 9th August 1902, when a crowd of 8000 gathered and sang the National Anthem at the time of the coronation of King Edward VIII. The words on the wall of the ex-chapel, faint in the photograph, seem to say “Mechanical Garage Works”.

It has not been possible to find an image of the original 1832 chapel, which was also at the Beast Market, presumably on the same site.