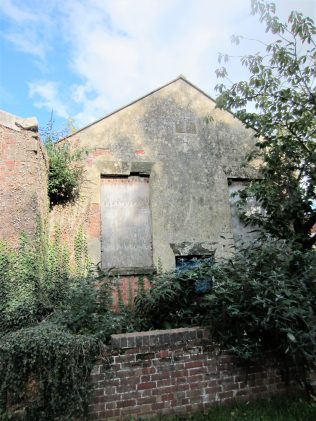 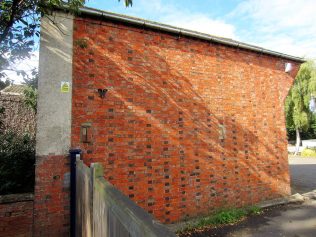 The chapel measured 24′ x 19′ and 14′ from floor to ceiling and was built of brick with stone heads and sills. The overall cost was £98 of which a third had been raised at the time of opening.

Opening services were preached on November 2nd 1851 by brothers Bendle and Yeates and at the following day’s tea meeting for 100, further addresses by the same two, together with Mr E Cox (Banbury) and Bro Stephenson.

The chapel is marked on Memorial Road on the 1:2,500 Ordnance Survey map of 1886, just south of the brook. By 1905 it is labelled as disused.  By 1975 it is replaced by a larger building, the current  factory. However, Anne Langley’s photographs show that in 2017 there is still evidence of the the former chapel building.

The former Wesleyan chapel is just round the corner in High Street.

“A Primitive Methodist group was meeting here from 1847 onwards. This is one of the two Primitive Methodist Chapels listed in the Royal Commission on Historical Monuments survey of Warwickshire: said to be SW of the Wesleyan Chapel (in the High St) with a 3-bay front and dated 1843. However, this date seems unlikely because it does not appear in the religious census of 1851. Leamington Circuit records suggest it was built in 1852 (though later records say 1857) to seat 100 at a cost of £97; there was an attendance of 40 in 1895 (of whom only 6 were members).

The building still stands in Memorial Road in a neglected state. It is disused but attached to a larger depot. The plaque is in poor condition and says ‘PRIMITIVE METHODIST CHAPEL’ (plus something illegible, probably a date). The chapel is built of red and blue brick in a pleasant pattern, with a slate roof. The front end has been covered in a thin layer of render (wearing off in places). The porch still stands with two boarded up windows either side with stone dressings. There is a low brick wall at the front. Two metal H-beams have been inserted into the side wall that is visible (the opposite side is now attached to the industrial building).

Circuit records of 1901 say it had been closed for some time and was let to the Wesleyans (perhaps as a hall because they already had their own chapel just round the corner in the High St). The chapel appears in trade directories from 1874-1900 and on OS 1st edition maps (1880s) but as ‘disused’ on 2nd edition maps (1900s). A solicitor’s letter of 1906 (tucked inside CR 1688/82) mentions the sale of the chapel for £62 and asks for the sole surviving trustee to sign the conveyance.