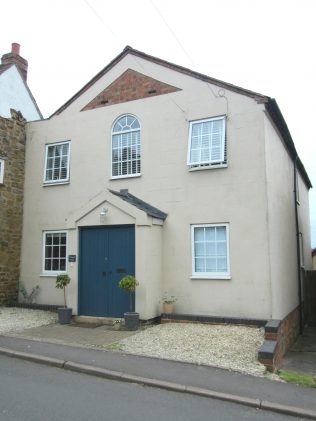 Napton was described in an account by Henry Yeates in the Primitive Methodist magazine of October 1853 as a populous village where there was a prosperous Primitive Methodist society of 60 members and a flourishing Sunday school.  This meant they needed to enlarge the chapel.  In fact they completely rebuilt it so it measured 37.5′ x 20.5′ and 17′ high, at a cost of around £100 of which they had raised £40.

The opening services started on July 17th 1853. Rev JP Percy preached and more than 200 people attended the tea. Thanks were due to the farmers for carrying the materials, R Mander for the inscription stone and Mr Alsop for allowing the chapel to be extended a yard or two onto his grounds.

Five years previously, in early 1848, there was a revival.  Petty tells us that “At Napton, upwards of thirty have been converted, among whom are some who were our worst enemies. Most of the new converts are going from house to house, proclaiming what God has done for their souls, — and the saving influence is extending; husbands and wives, parents and children, are turning to the Lord.”

The chapel is marked on Ordnance survey maps in 1955, but by 1974 it has disappeared. On Google Street View in August 2016 it still stands opposite the end of chapel lane but now in residential use – Chapel House.

Anne Langley tells us more about the Napton society:

“This little Primitive Methodist chapel was built in 1840 in the High Street of red brick with a slate roof and enlarged in 1852. The 1851 religious census records 113 sittings (though circuit records of 1895 suggest 180 following the enlargement); there was an attendance of 93 adults at the afternoon service plus 45 children at the Sunday School. The itinerant preacher was Henry Yeates who lived in Leamington and it was part of the Leamington Circuit. The cost of the chapel was £226 and the debt had been paid off by 1895.

There was a Sunday school from at least 1895-1931 (though it lapsed in some years). The building still survives in good condition as ‘Chapel House’ the walls have mostly been covered with render imitating stone.

The Rugby Advertiser reports a talk on ‘Christianity and Social Reform’ and a well-attended ‘coffee supper’ in 1911. It appears in Warwickshire trade directories from 1850-1932, on 1st & 2nd edition OS maps (1880s-1900s) and was still recorded as a Methodist Church in the 1950s.

Petty, John (1860) The History of the Primitive Methodist Connexion from its origin p.362.