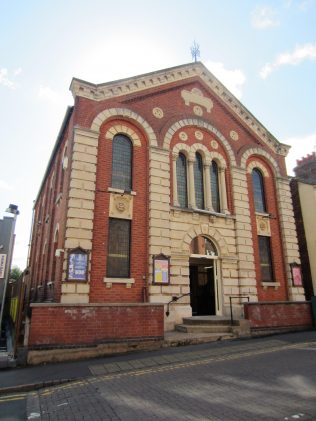 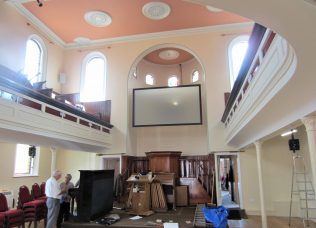 Rugby The first Primitive Methodist chapel was built in Queen Street on the corner of Russell Street in 1841.

A fine replacement Primitive Methodist Chapel with 450 sittings was built in Railway Terrace by James Kerridge & Sons of Wisbech. It is made of brick with contrasting dressings, a slate roof and decoration. The plaque outside is no longer legible, apart from the date of 1877. The chapel appears in trade directories from 1880-1932 and on OS maps from the 1st edition (1880s) onwards. There’s a meeting room at the back of the chapel that may have been added later.

There were regular reports of Primitive Methodist activities in the Rugby Advertiser. In Feb. 1911 the minister Rev. H. Ryan was recovering slowly from a nervous breakdown, tea was taken in the schoolroom and a lecture given on ‘Microscopes and Telescopes’; in March the ‘Men’s Own’ group had a talk about ‘A Friend’. In 1913 the Rev Ryan took a long trip to New Zealand and tried to resign, but the congregation still wanted him back. The Sunday School children were taken on an outing by train to Lutterworth; a summer garden party had to be moved indoors because of rain and the married men put on an entertainment.

The congregation joined other local dissenting churches to form the Rugby Brotherhood in 1912, which recruited around 400 members and held regular meetings; by March 1913 they had an athletic club and in 1916 the Brotherhood sent Christmas cards to their members in the trenches. The Primitive Methodists made serious efforts to get rid of their £100 overdraft: a ‘gold and silver’ tree was laden with gifts in envelopes that raised over £75.

Trade Directories show that the building was still in use as a Methodist Church in the 1940s and it appears on OS maps in the 1950s. A marriage register for 1915-1962 is to be found at the Warwickshire CRO.

The building survives in good condition; it was taken over in 1967 by the Evangelical Free Church and is still used by them for worship today. Inside there is an attractive balcony and the original stained-glass windows. The pulpit is still there but the pews downstairs have been removed to make the space more flexible.

Baptism records survive for Rugby and Long Lawford from 1892-1964 (Northamptonshire CRO: DRMC ML 3307); they have been transcribed and published by Eureka Press.