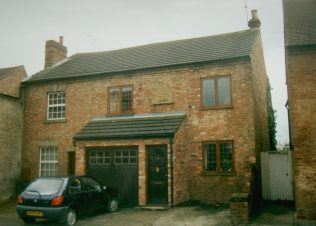 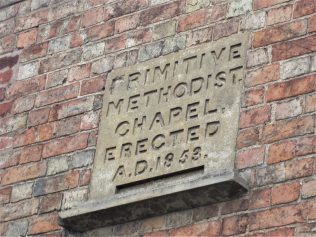 Pendyke Street Primitive Methodist chapel in Southam was opened in 1853 and closed in the 1950s.

At the time of Keith Guyler’s photograph in 2000, it had been converted into two houses, 20 and 21 Pendyke Street.  On Google Street View in July 2009 they retain a stone table proclaiming “Primitive Methodist chapel erected A.D. 1853”.

The Primitive Methodist Magazine of April 1854 includes an account by Henry Yeates of the opening of the chapel on February 12th 1854.  The chapel is described as 25′ x 20′ and 17′ from floor to ceiling, with a beam and iron columns so a gallery could be installed if necessary.  It might well have become necessary – “The chapel fills to overflowing.  The society is more than doubled; sinners are constantly getting converted and our prospects were never before so encouraging.”

Opening sermons were preached by Mr Edmonds, a merchant, and brother Martin, both of Banbury.  Mr Maunder of Banbury gave the inscription stone and Dr Montgomery of Southam made the plans and superintended the work.

“A Primitive Methodist Meeting Place is recorded in the 1851 religious census with sittings for 80 people; there was no service on census Sunday, but an average attendance of 40 with no Sunday School. The form was filled in by George Warner, a travelling preacher from Leamington. Shortly afterwards a chapel was built in Pendyke Street of red brick with a slate roof; the plaque says: ‘PRIMITIVE METHODIST CHAPEL ERECTED 1853’. This chapel had sittings for 120 and cost £747. The attendance at services in 1895 was 40 (of whom 16 were members). There was a Sunday School that was active up until 1928.

It appears in Warwickshire trade directories from 1874-1932 and on 1st and 2nd edition OS maps (1880s-1900s) and was still a chapel in the 1950s. Mr C Sheldrake (who had been assisting the Rev. W. Vaughan for a couple of years) was accepted for training at the Hartley Theological College in Manchester in 1912. A social followed by a coffee supper and a watch-night service was held on New Year’s Eve 1912. A Christian Endeavour group started in 1918. It was part of the Leamington circuit. The building still stands in good condition but has now been turned into two semi-detached houses.