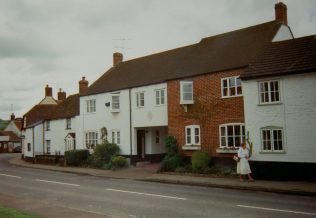 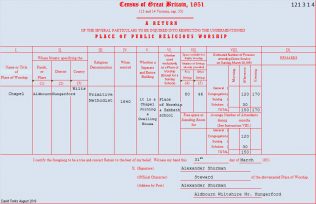 When Aldbourne was first missioned, it welcomed the preachers with “brutal opposition”.  Nonetheless, in 1840 cottages in West Street were converted into a Primitive Methodist chapel 30′ long x 11.5′ wide and by the 1851 Census of Places of Public Religious Worship, congregations of about 160 were recorded at both afternoon and evening services (and the village name was also spelled without an e at the end in the return).

In the Primitive Methodist magazine of February 1857 Samuel Turner tells us that by 1855 the chapel was unsafe and the associated cottage untenantable, so the chapel was rebuilt 36 ‘ long, 17.6′ wide and 15’ high, “with 10 circular headed windows and a deal floor”.  The Brinkworth District Building Committee recognised that the village society was not able to fund the rebuilding by itself, so money was raised throughout the District.  The chapel was opened on October 26th 1856 with the essential tea meeting the following day.  Sermons at the opening services were preached by Messrs. Williams, Samuel Turner (Stratton), Herridge and Charles Morse (Stratton) and  Mrs Deacon, Mrs Osmond and Mrs Jordan.

At the time of the opening the debt was a considerable £200, but they expected that “with rigid economy” and the rent of four guineas per year from the cottage, this could be reduced over time.

A new chapel was built on the same site in 1906 and this was extended in 1936. In 1968 the Primitive Methodists combined with the Wesleyan Methodists to form Aldbourne Methodist Church in a newly built hall in Lottage Road, the former Wesleyan site. The old chapel in West Street was demolished in 1982.

Keith Guyler’s notes record that at the time of the picture in 1994, they were Chapel Cottages.  The date 1986 is inscribed on a tablet on the front of the building.