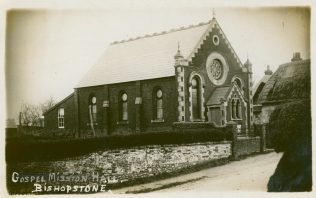 zoom
Bishopstone Primitive Methodist chapel. The words "Primitive Methodist" are carved around the circular window.
from a postcard sent on 2nd February 1919 to local preacher W.H. Hill of Stratton St Margaret saying quite formally "I expect to call and see you about 11am on Monday. Yours faithfully F Smith". Doesn't the telephone make life easier! 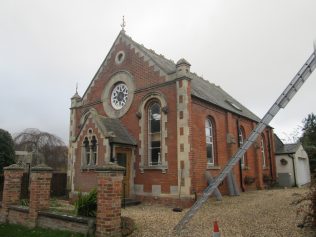 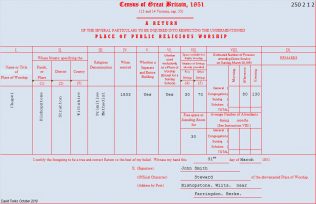 Take care; there are two villages called Bishopstone in Wiltshire. This one is at the foot of the chalk scarp of the Berkshire Downs.  It features well in the early work of the Berkshire Mission.

… a powerful camp meeting, the first held in the county of Berks, was held on Bishopstone Down, near Ashdown Park, on Sunday, May 30th, 1830. Some thousands attended in the afternoon; much divine power attended the word preached, and great good was effected. At night, an excellent lovefeast was held at Bishopstone, and several persons labouring under a burden of sin, found peace in believing. (Kendall History of the Primitive Methodist Church).

A chapel for Primitive Methodists was opened in the south-east part of the village in 1833. It was said to hold a congregation of 130 and to be full at the evening service on Census Sunday in 1851. It was replaced by a chapel at the south end of High Street in 1886. That chapel was closed c. 1970.

The Chapel was part of the Faringdon Methodist Circuit. The original Chapel was opened to the south east of the village in 1833. It cost £65 6s 2 1/2d to build, the Superintendent when erected was Mr John Ride. There were 10 members in the Society, although the congregation was around 80.

The building was was held by lease/lifehold of 3 lives with no ground rent with seating for 100 split into 68 for members and 32 free sitting.

The return for the 1851 census of Places of Public Religious Worship was completed by John Smith, the steward.  Was that the same man or same family that gave the land?

The 1886 Primitive Methodist magazine includes a note to record the opening of the chapel. No further detail is given.

For more insight into the place of Bishopstone and the surrounding countryside in the early missioning of Berkshire, see David Young’s account here.