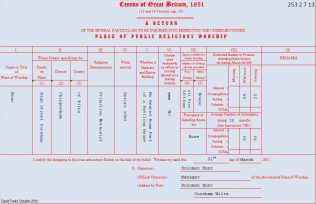 Primitive Methodism was introduced into Corsham around 1835 when, in the face of stern opposition, a small society was established. For some years they met in a cottage, after which a small room in a cottage was rented before a chapel was opened in 1855.  The 1851 Census of Places of Public Religious Worship, completed by Solomon Hunt (manager), reports an average afternoon and evening attendance of 30.

The new Corsham Primitive Methodist chapel was opened on Friday, the 16th  November, 1855. Opening preachers were Revs. E. A. Telfer (Wesleyan), J. Wicks, J. Richards, and Mr. N. Badminton. The services were well attended, and on the Sunday evening many could not gain entrance.

The chapel and the opening is described by John Richards in the 1856 Primitive Methodist magazine. “The chapel is 33 feet long, 22 feet wide without, and 15 feet high from the floor to the ceiling. The front and side walls are built of freestone, the roof is covered with the best slate, and the floor is of red deal. It has six windows, and is lighted with gas, and nicely fenced in with iron palisading. It will accommodate 140 persons, and the outlay will be about £180” (of which £100 was borrowed).

In 1926 the chapel was sold to the Brethren to become a Gospel Hall, still its use on Google Street View in September 2015.

There is a picture of the chapel on the Wiltshire County Council Community website; see it here.