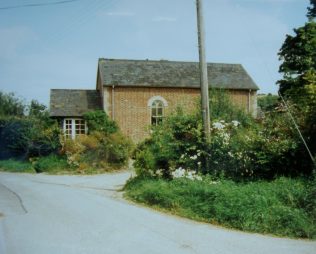 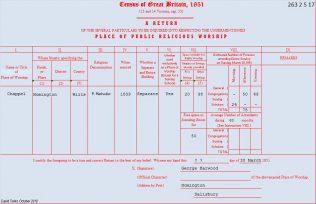 Homington Primitive Methodist Chapel was first built in  in 1841. It was rebuilt in 1877 but closed in 1967. At the time of Keith Guyler’s photograph in 1991 it was no longer in use. and has since been converted to a house.

The Bath Chronicle of April 1846 carried a coroners report of a death in the chapel:

“On Monday evening week, an awful instance of sudden death occurred at the village of Homington, near Salisbury. The deceased, Thomas Chaunt, a farm labourer, was present at the service at the Primitive Methodist Chapel in that place, on that evening, when, just after the text was delivered, he was seized with a fit, and immediately expired. The deceased has left a wife and six children to deplore his loss. An inquest was held on the following day, and the jury returned a verdict, “Died by the Visitation of God.”

We are told in the 1849 Primitive Methodist magazine (page 563)  that the society  then numbered 47 members and was expected to be debt free in 6 years.

The return from Homington Primitive Methodist chapel in the 1851 Census of Places of Public Religious Worship was completed by George Harwood. He reported attendance of 50 in the afternoon and 69 in the evening.  29 scholars met in the morning.