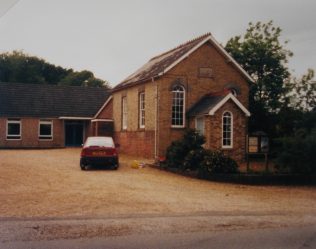 In 1816 a house belonging to Samuel Moody was licensed for Methodist worship and a thatched, mud walled chapel was built between Latchmore Cottage and Latchmore Farm in 1825. There were also open air ‘Camp’ meetings held on the opposite side of the road.

On census Sunday in 1851 three services were held in the chapel with congregations of over 80. In 1866 the congregation built the chapel shown in Keith Guyler’s photograph at a cost of £166.17.4d. It was opened on 16th October. The chapel served both Landford and Hamptworth. The Trustees managed to buy the land the chapel was on in 1921.  It was previously leased from the Hamptworth Lodge Estate.

The Methodist Union of 1932 was not implemented in the Salisbury area until 1940 when the chapel became Landford Methodist Church. The church still serves this area.