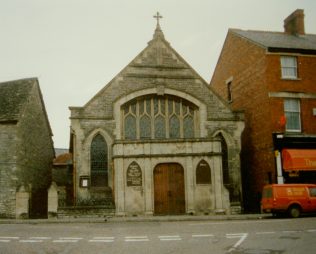 Brinkworth Circuit sent a mission to Malmesbury where they sang and preached in the open air at Burnivale and also used the Horse Fair and Cow Fair (Cross Hayes). Opposition came from a rather over zealous curate. “the preachers were brutally assaulted in the open air, and smashed windows and filth-bespattered congregations in cottages.” Their first building was a barn owned by R. C. Lloyd, Esq in St. Mary’s Lane and they also met in the Ebenezer chapel in Silver Street in 1814 and 1825.

They laid the foundation stone of their own chapel on April 18th 1856 in Bristol Street (SN16 0AZ) when the preacher was WE Telfer, Wesleyan minister of Chippenham.  There is an account taken from a local paper in the attached document.  The paper was enthusiastic about the benefits that Primitive Methodism would bring to the town: “Amid the drunkenness, licentiousness, and Sabbath desecration which surround us, the man must be destitute of a humane, not to say a Christian heart who does not see the propriety of sustaining and increasing the facilities for the usefulness of such an agency as that in use by the Primitive Methodists”

Col. Rushout, Esq., M.P., the lord of the manor,  enfranchised a piece of lifehold land for a chapel and the opening took place on August 17th and 18th, 1856. Addresses at the opening came from Thomas Church, from London, Brother Wallis, “our worthy superintendent”, Richards (from Chippenham), Brown, and Nullis. George Warner gives a detailed account in the October Primitive Methodist magazine

The church flourished and by 1859 was head of a Malmesbury Circuit. The congregation grew and by 1899 built a new chapel in the Triangle when their chapel was too small for the congregation. The rear of the chapel was a Sunday School.  In 1932 they were joined by the Wesleyan Methodists, whose Oxford Street chapel had been sold in 1919, to become the Methodist Church.

The Triangle chapel is no longer in use and has been converted into a five bedroom, 5 bathroom house.  In 2015 it is in use as a holiday let.

The Bristol Street chapel was used as a warehouse between 1932 and 1968, was then used as living accommodation and in 1998 was converted to a 3 storey house.

There are many more pictures at: