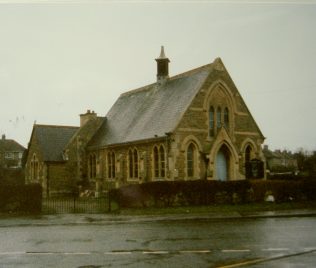 “A Primitive Methodist Mission known as the Castle Combe Mission and afterwards as the Chippenham Mission of the Brinkworth Circuit was launched in 1829, and ‘preaching places’ were established at Melksham and Forest. The early years of the Mission saw considerable struggle and persecution but by 1835 the Mission had become a circuit comprising 41 places. In 1839 there were 15 members at Melksham and 10 years later 33. Membership subsequently rose to 40 but in 1863 there were only 6, and at the end of the year the Mission Room in the town was closed and the furniture sold ‘to help pay the rent, £4, which is due’. The furniture fetched only £2 and the balance was raised by subscription.

Unlike the town mission the Primitive Methodist Society at Forest flourished. In the early years of the struggle which it shared with the town society, membership was small—no more than 7 both in 1839 and 1849. By 1863, however, when the town society collapsed, membership had risen to 12. Two houses in Lower Forest Lane were purchased in 1852 and adapted as the Society’s first chapel which was opened in 1856.

Plans for forming a Sunday school were made as early as 1864 and one was certainly formed by 1875. There was a decline in the fortunes of the school in 1886 and it was closed for three years.  In 1890 membership at Forest stood at 15 but numbers grew considerably during the next ten years, and in 1905 the present stone chapel in Forest Road was opened.

The adjoining hall was built in 1937.

In 2015 the former chapel building is used as the base for a vetinary practice.