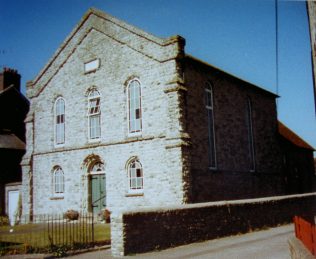 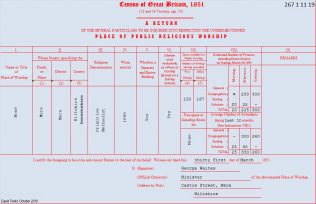 Mere is north of Shaftesbury.  Mere Primitive Methodist chapel was opened in 1846 for a congregation of mainly agricultural workers and small tradespeople of the area.

The Return from Mere Primitive Methodist chapel in the 1851 Census of Places of Public Religious Worship records 200 attending in the afternoon and 300 in the evening – more that the buildings declared capacity of 267. There was also a Sunday school with 20 scholars in the morning and 25 in the afternoon.  The return was completed by the minister, George Waites of Castle Street, Mere.

As numbers steadily increased, a gallery was built in the chapel in 1859. A Sunday School was begun and in 1874 a schoolroom was built behind the chapel. As the congregation flourished new pews and windows were provided in 1877 and in 1903 a new manse was built.

The building is still the home of Mere Methodist church in 2015.