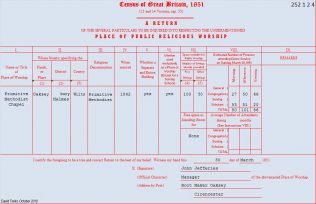 AND OPENING OF A CHAPEL AT OAKSEY,

IN THE CIRENCESTER BRANCH OF THE BRINKWORTH CIRCUIT.

OAKSEY is a village about six miles from Cirencester, and it contains about six hundred inhabitants.  Before it was visited by the Primitive Methodist missionaries, in 1837, the inhabitants were noted for sabbath-breaking and drunkenness.  When the missionaries first uplifted the voice of warning, many of the villagers flocked to hear them, but, through the influence exercised by the clergyman of the parish, they durst neither give the missionaries a night’s entertainment, nor open their houses for the holding of religious ser­vices.  The visits of the missionaries were repeated, notwithstanding, and when the weather was snowy, frosty, or rainy, meetings continued to be held in the open air, till the year 1830, when, through the barrenness of the village, the servants of Christ withdrew their labours.  The inhabitants were then left to commit sin without warning, and therefore became more excessive in vice than they had formerly been.

But a second attack was made upon them, in the year 1838, by Brothers Preston and Excel, who had been sent by Brinkworth circuit to mission Tetbury, which is about six miles from Oaksey.  The second attack was made under more favourable circumstances than the first: for a man who had been awakened under the missionaries, removed to Oaksey; and, when it was remissioned, he allowed meetings to be conducted in his house, and soon a small society was formed.  In the year 1841, I was stationed in Cirencester branch, and had occasionally to preach at Oaksey, which I found in a very low state, having only two mem­bers in the society.  A revival of the work of God was besought, by fervent prayer; and a preaching room was rented at two pounds ten shillings a year.  At a lovefeast, held soon afterwards, several sinners were awakened, some of whom found salvation.  Some of the servants of Mr. Horton, at Oaksey park, were of those who were converted.  Convinced that religion had improved the condition of his servants, Mr. Horton became friendly to our cause.  Meanwhile the preaching-room was so crowded with hearers, that a larger place of worship was necessary, and the members began to pray especially that the Lord would open the way for building a new chapel.  Soon Mr. Horton joined the society, and purchased a plot of land on which to erect a chapel, and then gave it to the Connexion.  On March the 23rd, 1841, sermons were preached on the foundation-stone of the chapel, by Brothers Ruston and Best, and the chapel was opened for divine worship on August the 14th, by Brother William Driffield.  A gracious influence was felt at the services, and the collections were liberal.  After the evening service, Brother Driffield introduced the Golden System, and obtained the promise of twenty-three pounds towards the first anniversary collections.  And I may add, that persons who had been opposed to us, became so far conciliated that they came forward to help us in erecting the chapel, and in lessening its debt.  The chapel is thirty feet in length, twenty feet in width, and, in height, fifteen feet.  It is built of good stone, is covered with blue slate, and is secured to the Connexion by a properly constructed deed.  It contains forty-eight sittings which are let, except three, and the rents of these will produce more than the interest for the borrowed money, which is one hundred and thirty pounds fifteen shillings and ten-pence.

We tender our thanks to Messrs. Horton and Reynots, who gave us the land, and hauled the materials for the building; and to all the kind friends who have otherwise assisted us.”

The chapel  prospered and needed enlarging because at times they had to ask the Sunday school children to leave to make room for the congregation, so they added a gallery to accommodate the children.  It cost £18, and they raised more than enough to cover the cost, including £1 – 1s – 5½d raised by the children. The report of the re-opening on July 14th 1850 was written by Thomas Williams in the Primitive Methodist magazine.

At the 1851 religious census, the chapel was attended by 101 people during afternoon service: it had to be rebuilt in 1874. After World War Two, Methodism declined and the chapel was first used for storing hay (c.1956) before it was turned into a private residence. It still carries its tablet on Street View in 2009, located at the corner of Coppice Lane.