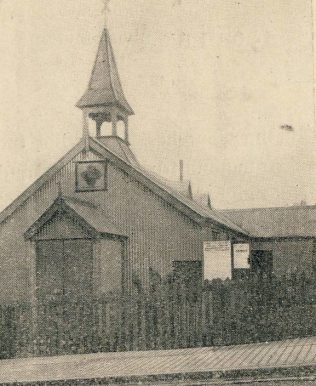 The Souvenir Official handbook of the Brinkworth and Swindon District Synod, held in Swindon from April 28th to May 3rd 1910 to celebrate the Connexion Centenary gives the following information about the Deacon Street society:

“The site upon which this Church stands was secured in 1894; open air meetings were occasionally held upon this ground.

The church was erected in 1899 and opened in Jan 1900.  The cost with additions since made amounted to £271 and the present debt is £110.  There was no society but a society was formed soon after with 10 members; today there are 28 with 13 Sunday School teachers and 74 scholars.”

The chapel was made of galvanised iron.  British History online reports that “the congregation gradually dwindled and in 1920 the chapel was closed”.