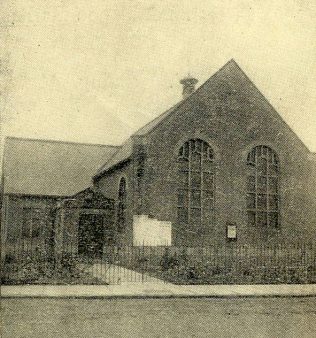 The Souvenir Official handbook of the Brinkworth and Swindon District Synod, held in Swindon from April 28th to May 3rd 1910 to celebrate the Connexion Centenary gives the following information about the Ferndale Road society:

“The first services at Ferndale Road were held on July 19 1903.  Land for a church, school house &c was purchased in June 1904.  With no society, it was resolved in 1907 to build the present Centenary Hall.  This was opened in October the same year.  Services for a few months had been held in the council school.  The total cost has been £1,200; present liabilities are £632.  A society was formed and the first class of 21 members met on November 26 1907; today there are 30 members, 19 Sunday School teachers and 148 scholars.”

The chapel was built by  Mr G Kilminster. It was of course Centenary Hall to celebrate the centenary of the Connexion.

“This building is known as the Centenary Hall, being opened in 1907 the Connexional Centenary Year. When the decision to build was made,. there was no society, but by November 1907 there was a class of 21 members which has now grown to 51. Messrs. M. Watts, C. Price and W. Griffin with their wives, Mesdames Spanswick, Hurcome, Francome, Miss L. Cook and Mr. A. Wentworth, well known for his work in connection with the N.U.R., have been members from the be­ginning. Mr. W. Hazel, who passed away in 1928, was known as the Circuit poet. A man of sterling character he was founder of the Xmas Free Tea for poor children of Swindon, which looks like becoming his permanent memorial. Mr. N. Toze, another prominent worker, delights to carry on this great effort.

A `Women’s Bright Hour’ functions admirably under the supervision of Mesdames J. Beint, Haskins and Watts. The Boy Scouts are well led by Mr. Clarke and Mr. N. Toze. A tennis court adjoining the church affords a means of healthy recreation, and is an example of the voluntary labour so freely given here.”

The Rev. C. S. J. Haskins of Knaresborough, received much of his early training in this church.

It was of course Centenary Hall to celebrate the centenary of the Connexion.  The church closed in 1993.