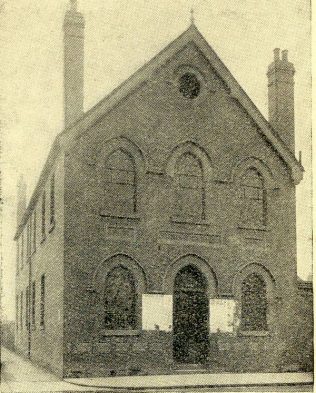 The Souvenir Official handbook of the Brinkworth and Swindon District Synod, held in Swindon from April 28th to May 3rd 1910 to celebrate the Connexion Centenary gives the following information about the Manchester Road society:

“For many years services had been held in Mill Street, afterwards called Manchester Road.  A camp meeting was held on July 2nd 1899; open air services were held during the summer of 1902.  With no society the present school church was built a cost of £1,161; present debt £460.

Within 6 months of the opening a society of 27 members  had been formed: the membership today is 41; Sunday School teachers 19; scholars 141.”

The chapel was built by  Mr RJ Leighfield and the report on its opening by Mrs LL Morse says that “a special feature of the building is that it is to be lighted with electric lights”.

The Church has always had a fine body of workers in all its departments, and like many other churches owes much to an excellent choir. More room is badly needed for its many activities. The land adjoining the present building, as well as that on which it stands, was, through the instrumentality of Mr. A. E. Harding, secured as a gift from Mr. S. V. Rolleston, the owner, a few years ago. A Women’s Meeting, under the leadership of Mrs. W. T. Harding, is a great success. The C.E. and other services are well attended. The Young People’s Bible Classes under Mrs. Woodman and Mr. E. Peyton, are proving themselves of great value in providing good church workers.”

The use of the phrase “school church” is interesting. The inscription on the building still (July 2012) reads “PM Sunday School 1902.”  It is a tall building and I recall that when I went to Swindon Orpheus Choir practices there in the 1960s the church was downstairs and a number of rooms, including a sizable one, presumably the Sunday School, upstairs.  When Regent Street Primitive Methodist Church was sold in 1960, some of the money raised was used to build a small chapel to the right hand side of the original building.

My parents, Ewart Hill and Doris Nelson, were married here in the early 1940s. Dad was late.

The school building which actually fronts onto Alfred Street at its junction with Manchester Road, is currently the Hazrat Shahjahal Mosque and Bangladesh Islamic Centre.