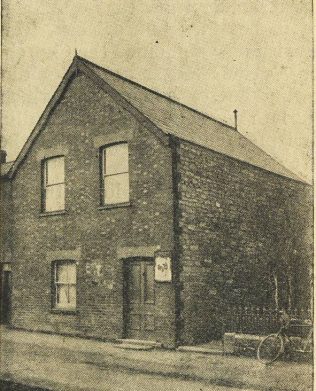 The Souvenir Official handbook of the Brinkworth and Swindon District Synod, held in Swindon from April 28th to May 3rd 1910 to celebrate the Connexion Centenary gives the following information about the Moredon society:

“Moredon was first missioned in 1831 and services were planned for 5 o’clock in the afternoon and were taken off again in December 1832.  Open air meetings for many years were occasionally held.

The present society was formed on Sunday April 5th 1885 with 8 members, today the membership is 17.

The Souvenir Handbook for the 1932 Brinkworth and District Synod, held in Regent Street chapel, Swindon says about Moredon:

“The present Society was formed in 1885 with 8 members, the membership now being 11. The Church was purchased in 1902, at a cost of £180. Services in the Upper Room here have been of incalculable benefit to the life of the hamlet. Great credit is due to the Howse and Teagle families, and later to Mr. D. Werrill, Mrs. Nippress, Mrs. Walters, Mrs. Brock and others for holding on through difficult days.”

St Andrew’s Methodist Church in Moredon Road was formed in 1962 with a new building following the amalgamation of the churches in Rodbourne Cheney, Moredon and Haydon Wick, with a vision of providing a closer link to a growing neighbourhood.