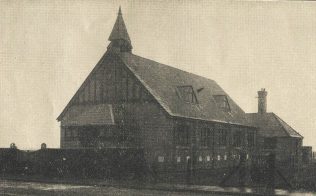 The last chapel to be built in Swindon before Methodist union in the 1930s was at Pinehurst in 1928.  Land was given by Mr F Hinton of Wanborough in memory of his father.  Through the generosity of Mr WE Morse an extra minister was employed whose special work was to look after Pinehurst.

The church was designed to seat 250 and was”artistically designed, centrally heated and electrically lighted”.  It did not thrive at first, but later grew with the area around it.

“The ‘infant Church of the Circuit’ is built on land given by Mr. F. Hinton (Wanborough) in memory of his father. Following open air missions, services were held for some time at No. 32 Linden Avenue. At the foundation stone-laying on May 22nd 1928, 33 stones were laid.

Mr. W. E. Morse who presided at the evening meeting held in Regent Street Church, said “there was no fear of Pinehurst ever being regarded as an unwanted child. They would look after it and care for it in the early days until it was strong enough to go by itself.” It was through the generosity of Mr. Morse that an extra minister was engaged whose special work is to look after Pinehurst. The total amount raised on this day was £319 : 18 : 6. The opening service was held on November 10th, 1928, the door being unlocked by Mr. A. E. Harding, who as Trust Secretary did the secretarial and financial work preparatory to the erection of the building.

The Rev. W. J. Ward, Home Missions Secretary, preached the opening sermon. The Vicar of Rodbourne Cheney, the Rev. C. Brown, was present at the evening meeting to wish them God-speed.

The. Church, artistically designed, centrally heated and electrically lighted, seats 250. At the time of stone-laying there were no members, now there are 28. Mr. H. Watkins, J.P. ‘ fathered ‘ the society for the first few months, and since then the work has been carried on by members of other Churches who have transferred, and members resident in the Pinehurst area.

The Sunday School and Junior C.E. is flourishing ; there is a successful Women’s Meeting, and a men’s fellowship promises well. The Rev. T. Sutcliffe, like his predecessor, Rev. N. M. Wills, has worked untiringly for the cause. The task of raising £75 per annum in order to fulfil the conditions of a loan is by no means easy, and gifts are always welcome.”

The chapel was still operating in the 1960s but has since been closed and demolished.