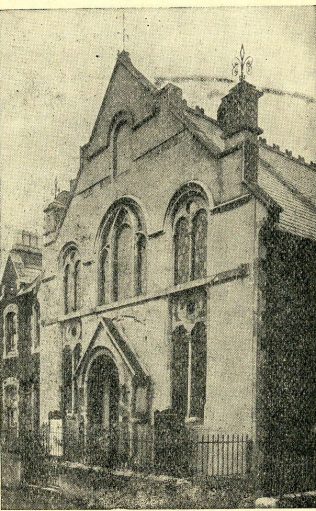 Prospect chapel is situated at the top of the hill which joins the old settlement of Swindon with the new town build on the clay vale below to house the works of the Great Western Railway after 1840.

For many years services were held in a cottage until the chapel was erected in 1870.  The laying of the foundation stone on September 14th 1870 and the opening of the chapel by Rev W Jones is recorded in the Primitive Methodist magazine by Nathaniel Watts. He tells us that three to four years previously a piece of land had been offered for £100. The new chapel measured 40’8″(l) x 28’4″(w) x  21′(h) and seated 200.  There was a minister’s house adjoining.

The chapel was twice enlarged and better school accommodation provided. The 1885 Primitive Methodist magazine records  the laying of the foundation stones for a new school, classrooms and minister’s vestry. It boasted a Band formed in 1908 in order to improve the outdoor mission work.

In 1910 its vital statistics were recorded in the Brinkworth and Swindon Synod Handbook as:

The Souvenir and Official Handbook of the Brinkworth and Swindon District Synod (April/May 1925) says of Prospect:
“There is nothing spectacular about Prospect.  Solid work has been done.  The contribution to public welfare is neither small nor mean.  In quietness and confidence the Church finds its strength.  Worship is marked by reverence with less outward enthusiasm than in the early days, the congregation is a good one to preach to and the Word received in good and honest hearts shall yield much increase in the coming years.”

The building still exists and is used as a church by Assemblies of God (2012).