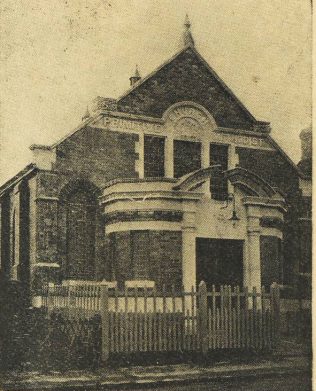 The Souvenir Official handbook of the Brinkworth and Swindon District Synod, held in Swindon from April 28th to May 3rd 1910 to celebrate the Connexion Centenary gives the following information about the Rodbourne Cheney society:

“Rodbourne Cheney was missioned by camp meetings in July 1891 and August 5th 1894 after which services were held on Sunday evenings at the house of Mrs Matthews.

The chapel was built by  Mr AJ Colborne.

“Open air work in which Mr. A. T. Orchard took a leading part, and Sunday Evening Meetings in the house of Mrs. G. H. Matthews, preceded the building of the first chapel here for which Mr. L. L. Morse gave the land. The building, now used as a Schoolroom, was opened in 1894, the Rev. W. M. Smith (Presbyterian) being the preacher. A society of 6 members was formed, the number now being 52. The present church seating 230 was built in 1906 at a cost of £693. Themission services of 1905 made a deep and lasting impression on the neighbourhood. The late Mr. A. Hobbs was greatly respected for his sterling character and good work. A men’s fellowship meets with encouraging success.”

St Andrew’s Methodist Church in Moredon Road was formed in 1962 following the amalgamation of the churches in Rodbourne Cheney, Moredon and Haydon Wick, with a vision of providing a closer link to a growing neighbourhood.  The PM chapel in Cheney Manor Road was taken over by the Baptists. The inscribed stone on the front of the chapel in Cheney Manor Road was then amended to read ‘Rodbourne Baptist Church 1906’.