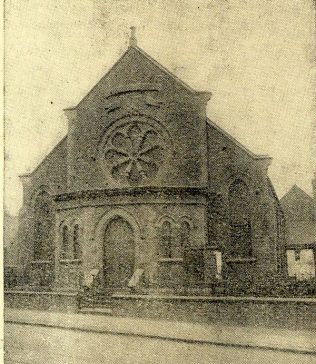 The Souvenir Official handbook of the Brinkworth and Swindon District Synod, held in Swindon from April 28th to May 3rd 1910 to celebrate the Connexion  Centenary gives the following information about the Rodbourne Road society:

There are 23 Sunday School teachers and 189 scholars.”

The chapel was built by  Mr RJ Leighfield.

“This Society was formed in 1882 with 7 members; to-day the membership is 80. The first chapel, now used as a school, was built in 1883 and cost £321. Lord Edmond Fitzmaurice M.P. was present at the foundation-stone laying of the present building which was opened in March 1901. Alterations to the entrance have since been made to meet the needs of the local authorities. The services here are well maintained. Mr. W. Ponter, organist, with a good choir render a great service. The Church Anniversary is a great occasion, in which Mr. W. E. Morse takes special interest. A Brotherhood, started by Rev. E. P. Sellars, is meeting a felt need. Rev. A. E. Mills of Winterton, is a son of Mr. and Mrs. W. Mills, greatly respected members. Mr. W. T. Smith, B.Sc., Educational Supervisor in the Nigerian Mission field, and previously a member of the Choir is a son of Mr. Frank Smith, local preacher, and grandson of Mr. Tom Smith, one of the pioneers. His wife is the daughter of Mr. and Mrs. R. G. Pockett, who had a long connection with this church.”

The last service took place on January 5th 2003, prior to demolition.  There is still a Methodist church on the site, now known simply as Rodbourne Methodist Church.