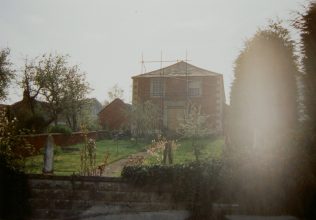 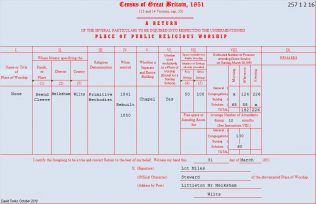 John Wesley preached in Seend on a number of occasions, and in 1775 he opened the new Methodist Chapel in Factory Row (now renamed Weavers’ Cottages) which has been in continuous use ever since.

The Primitive Methodist society was formed by 1841 when the first chapel was built.  It was rebuilt in 1849 and in 1863 a circuit minister went to live in the village.  Seend Cleeve continued to flourish even after the removal of the minister to Calne in 1883. It included a Sunday school in the 19th century but closed in 1979 and in 2006 was converted to a dwelling house.

The chapel had a graveyard.

There is an account of the opening of the chapel in the Primitive Methodist magazine.

“Seend Cleeve  The house occupied by the P. Methodists in this place was tolerably large, and generally filled; but it was rather low, which made it not quite so comfortable as could be desired. But we could not remain in it quiet and undisturbed; the new minister who had come to the church was fully bent upon putting a stop to it altogether; and accordingly applied to the woman who lived in the house (a widow) for that purpose. He told her she was encouraging wickedness to take such people into her house. She replied, “Sir, I did not take them in; it was they that took me in.” She lived in the house, and paid part of the rent, the society paying the other part. The clergyman understanding this, asked if she would turn them out, providing he would pay part of the rent.

A person in the neighbourhood who had some free land of his own, hearing of the circumstance, offered to give a piece of land for the purpose of building a chapel, if the society liked to accept of it. The offer was accepted, the ground secured, and a chapel, twenty-five feet by eighteen in the clear, was erected. The walls are of stone, thirteen feet high; and being ceiled up to the rafters, so as to clear fifteen feet between the floor and the ceiling, there is room to put up an end gallery, if wanted. There four circular-headed windows, two in the pulpit end, and two in one side.

This place for public worship was opened on Sunday, September 26, 1841. Mr. Pope, from Motcombe, preached two excellent sermons on the occasion; one in the morning, and the other in the evening; and E. Foizey preached in the afternoon. The day was unfavourable, being so very rainy: nevertheless the congregations were large, and the collections quite equalled our expectations. The “GOLDEN System” was introduced, and six pounds were promised for the first anniversary. Both congregation and society are improving, and appear in a way to do well. The chapel is secured to the Connexion.”