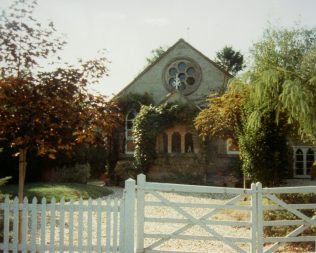 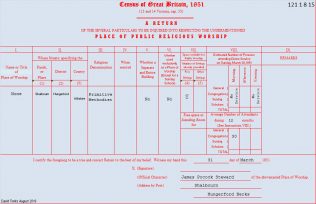 The notes with Keith Guyler’s  picture of the former chapel in Kingston Road, Shalbourne (SN8 3QF, just east of the Plough Inn), describe it as the former Primitive Methodist Chapel and date it as 1911. In fact on the 1924 Ordnance Survey 1:2,500 map it is labelled as the Wesleyan chapel.  He may be correct as to the 1911 date as on the 1900 O.S. map the Wesleyan chapel is shown not here but further to the north-east along Kingston Road, on the opposite side of the road.

Cosburn’s Directory of 1911 mentions both Wesleyan and Primitive Methodist chapels in Shalbourne; so where was the Primitive Methodist chapel?  It can clearly be seen on the 1:2,500 Ordnance Survey maps in both 1900 and 1924 at the junction of Daniel’s Lane and Hungerford Road, some way out of the village.  There is just a clump of trees visible on Street View there now.

We can find a little more about the Primitive Methodist society.