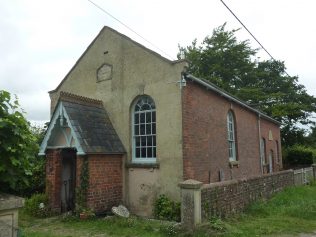 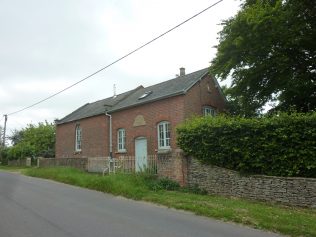 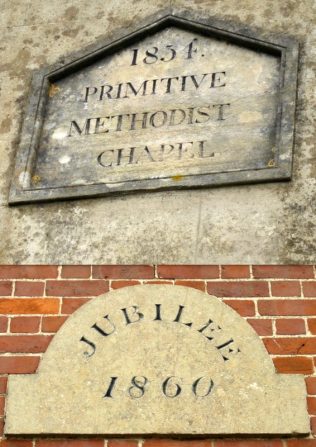 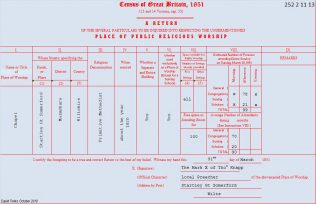 The 1851 Census of places of Public Religious Worship contains an entry for Startley Great Somerford saying that the society met in a chapel built around 1820.  The return is signed with the mark X of Thomas Knapp, local preacher.

The ceremony was held on Thursday August 17th 1854 and the stone was laid by J Beak Esq.. Sermons were preached by Rev J Richards, Rev B Rees (Independent) and Messrs. Heath, Mills Turner and Dobinson.

And of course there was a tea, in this case for 200 people, provided by Miss Knapp and Mr Curtis.

The account of the opening is in the November 1854 magazine on Thursday October 12th 1854.  Preachers in the afternoon and evening included Rev B Rees, Rev J Richards, and Messrs Whitmore, Heath, Turner and Mills.  The tea this time was for 160 people. On the following Sunday, Rev W Driffield and Rev M Heath preached the sermons.  The congregations “were large and respectable” although there was no tea.

On May 14th 1860,  a sermon was preached by Mr. J. Causer, of Chippenham, after which Mr. John Hitchcock laid the foundation stone of a new schoolroom. This time tea was provided and 100 people were fed. A public meeting was held in the evening presided over by T Powell and addresses were delivered by Messrs. Stokes (Independent), Ash (Baptist), Smith and Causer (Primitives).

The chapel is still in existence in August 2016 although its use is not clear. Over the door is the inscription “Primitive Methodist chapel” and a date; on Street View I can read the numbers 185 but the extra numeral is unclear. On the northern wall there is a small extension which includes the inscribed stone “Jubilee 1860” – presumably the schoolroom.

Opposite the chapel is a small cemetery.

Thanks to Colin Fry and Judith Verity for the photographs.