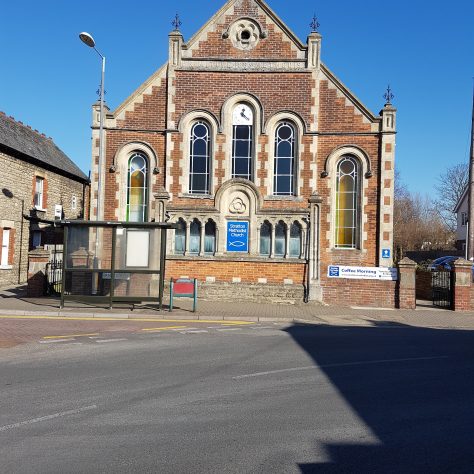 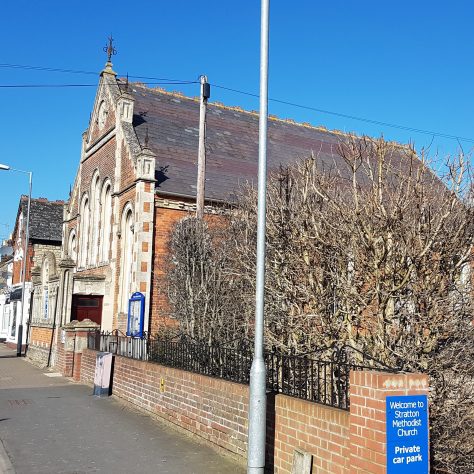 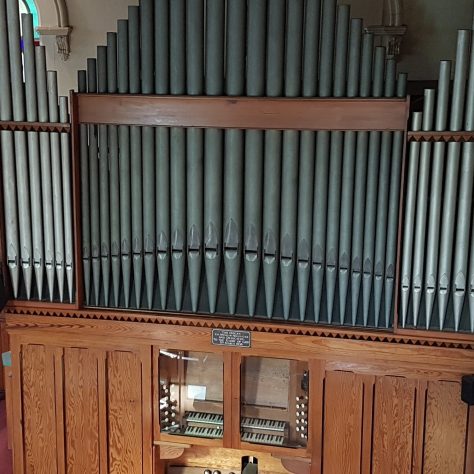 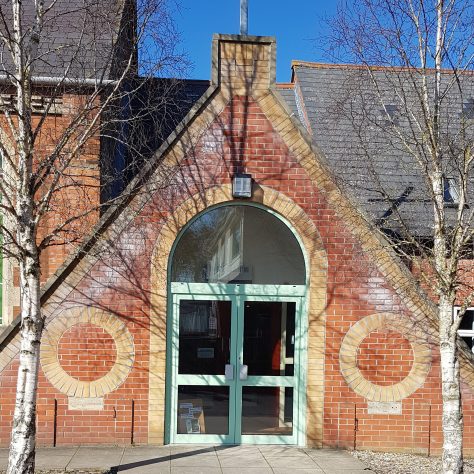 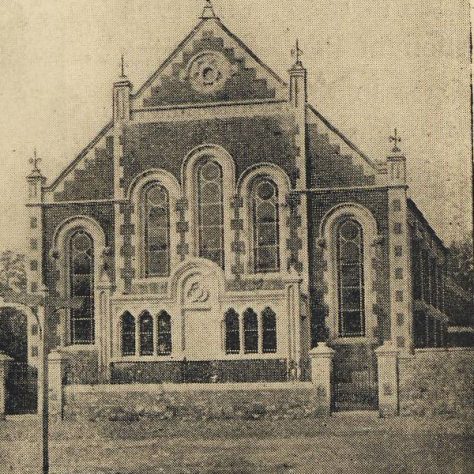 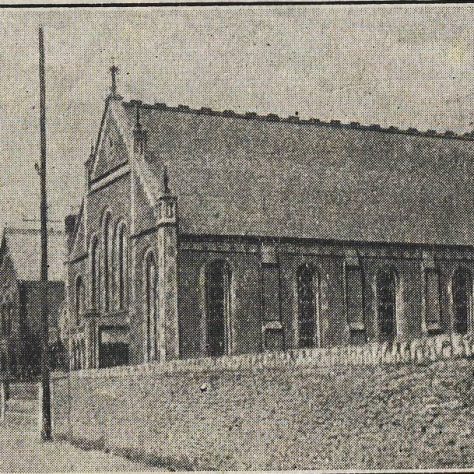 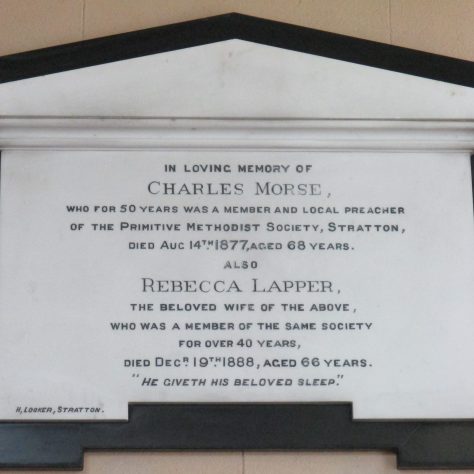 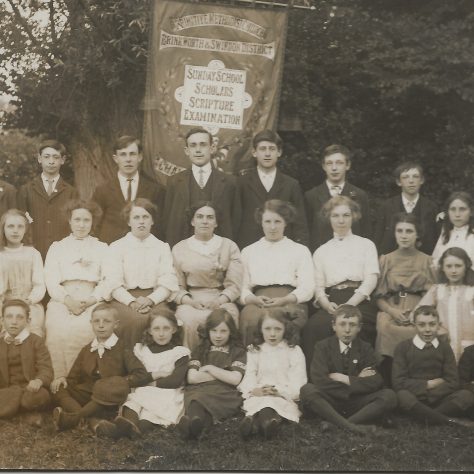 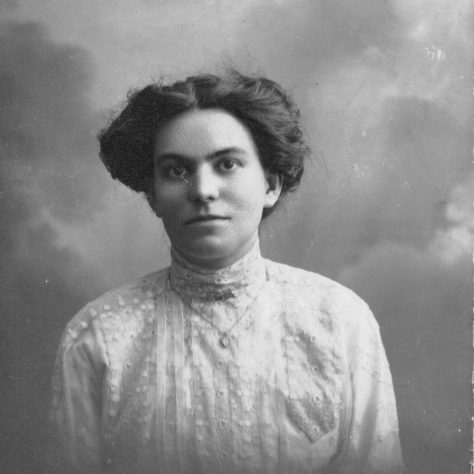 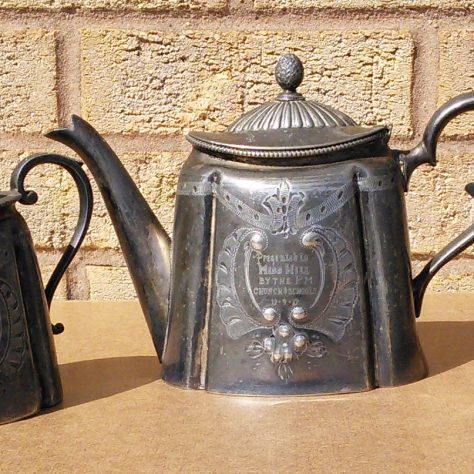 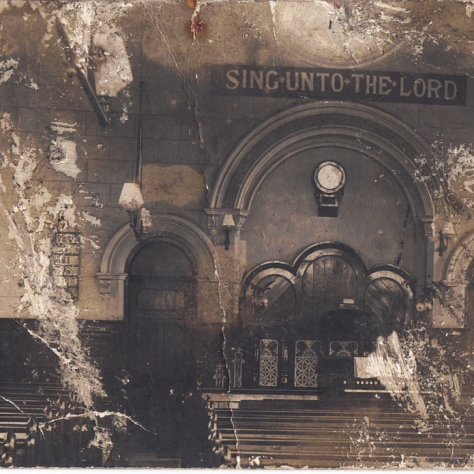 Stratton chapel before organ installation in 1938. Note the position of the clock!
postcard sent c 1935 by Wycliffe Hill to future wife Birdie Phillips

A brief history of this chapel can be found on the Stratton Methodist Church Website.

The first Primitive Methodist chapel in Lower Stratton (also known as Stratton St Margaret) was built on Swindon Road in 1830; you can read about it here

In 1884 as the congregation grew, a new church was built by Thomas Colborne.  About 12 months later the old building was sold and new schools erected.  The “neat commodious” new chapel cost £1,100 of which they had raised £750 – a higher proportion than many new chapels.

For a while the old chapel was used for the Sunday school, until the new school accommodation was built behind the new chapel. The December 1891 Primitive Methodist magazine records the start of work on the new school.  Optimistically, they hoped it would be free of debt by the time of completion.

In 1910 the vital statistics of the chapel and society were recorded in the Brinkworth and Swindon Synod Handbook as:

Amongst its early members were Charles and Rebecca Morse, founders of a Primitive Methodist dynasty and a major Swindon department store.  See the pages on Levi Lapper Morse, their son and later Vice President of the Conference.

The Feb 1913 Primitive Methodist Leader tells us about the picture with the banner:

“The Brinkworth and Swindon District challenge banner, in connection with the Scholars’ Scripture Examination, has been won by the Stratton St. Margaret School. At the 1912 examination thirty-two scholars. passed, thirty-one in the first division, fourteen gaining honours. The school won the first district prize and all the four circuit prizes. The scholars had been capably trained by Miss T. Hill. The annual prize distribution took place at Lower Stratton on February 16th, the books being distributed by Mrs. Fry. The prizes won in the Scholars’ Examination were also distributed.”

Louisa Miller (formerly Louisa Hill) was a significant leader in the society, including as organist for many years, and is  seated in the middle of the picture showing the scholars with the banner. Miss T Hill is most likely a misprint for L – Louisa Hill who did not marry William Miller until 1917. Lower Stratton Sunday School won the Scripture Examination District challenge banner for three years in a row and as a result retained the banner.  In the winning teams were four of WH Hill’s children – Bramwell (back row third right), Howard (?), Frances (third left middle row)and Muriel  (third left on grass) Hill.

The chapel site boasted an orchard used for Camp meetings and outdoor activities, together with two tennis courts.  The story of the new organ can be seen on this page.