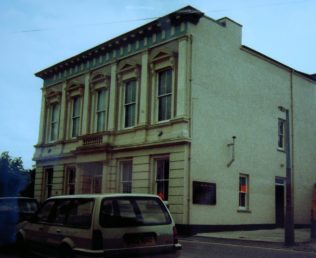 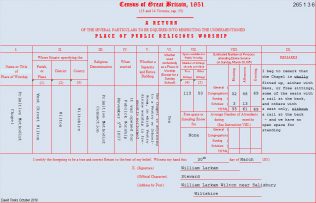 In 1821 the house of William Sanger, a ‘Tent’ Methodist then preaching in Salisbury, was licensed for Primitive Methodist worship. By 1829 there was a regular congregation of 40 members.

In 1837 a new chapel with 113 free and 50 other seats was opened in West Street. H Sharman tells us about the celebrations which started on November 5th 1837 in the Primitive Methodist magazine. Bro William Paddison and Bro H Sharman were amongst the opening speakers. The chapel had a pretty gallery at one end and a schoolroom attached. Special thanks were due to Mr Wm. Larkam (Earl of Pembroke’s carpenter) for his superintendence of the building.

Wilton , Salisbury Circuit. – Our new chapel in Wilton was opened on Sunday, Nov. 5, 1837.  Bro. William Paddison, from Motcomb, preached in the morning and evening; and Bro. H. Sharman, from Salisbury, in the afternoon.  The congregations were large, and the collections gave satisfaction to the friends.

The chapel is about thirty-two feet by nineteen in the clear, with a pretty gallery at one end.  It is well lighted, and has good convenience for receiving fresh air. A school room is attached, and the whole is settled on the Connexion, according to our own trust-deed; and the whole is in comfortable circumstances.

The trustees take this opportunity to return thanks to all the kind friends who gave assistance on the occasion; and especially to our kind friend Mr. Wm. Larkam, of Wilton (the Earl of Pembroke’s carpenter), for his superintendance of the building, and other kindness to our cause in that concern.

This, after many years of hard struggling, is what the Lord has done for us, in what was once the county town of Wilts.  His name be praised.  Our prospects now are encouraging.

In the 1851 religious census the attendance was 32 for morning service, 48 for the afternoon and 69 in the evening, with 16 children at Sunday School.

In 1880 (1875 according to the Wiltshire Community history website)  an impressive new chapel, with seating for 150, was opened in Kingsbury Square and the old one closed. In 1936 the Primitive and Wesleyan congregations combined in the ex Primitive chapel. Later the Methodists moved in with the Wilton URC congregation and the building became St. Edith’s Roman Catholic Church. The Methodist and the United Reform congregation later moved back in.

On Google Street View 2011 there is no indication on the building as to what it is used for.