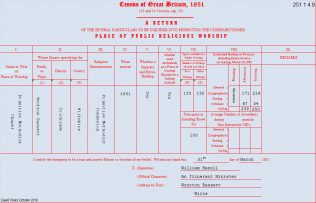 Wootton Bassett Primitive Methodist chapel dates from 1831.  Opening services conducted by Brother Jukes were held on Sunday October 2nd 1831. S Turner describes the opening in the Primitive Methodist magazine. It was part of the Brinkworth circuit.

In 1824 Primitive Methodist preachers first visited Wootton Bassett and obtained a cottage for their services.  They then rented the ‘Long Room’ of the old Royal Oak Inn. In 1831 two houses and a garden were bought on the present site and converted into a chapel to seat 2-300 people.

As the Methodist cause prospered, in 1838 the old chapel was pulled down and the foundation stones of the present building were laid on March 25 1838. The new chapel which measured 40′ long by 30’wide and 17′ high, was opened on Sunday and Monday August 19 and 20th 1838. Joseph Preston describes the occasion in the Primitive Methodist magazine. Speakers and other significant names include  Bro H. Bourne, Sisters West and Miles, and  Bros Heys, Pope, Foizey & Coxhead.

The chapel is still in use today and it is good to learn that the church website declares “It is good to say that Wootton Bassett Methodist Church is as strong, if not stronger, than at any time in its history.”

As a child I sang in both chapels, but was told in High Street they could not afford to pay me as much as the Hillside folk had done.