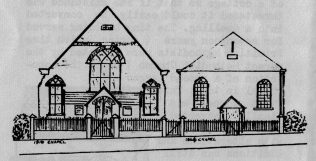 But it wasn’t straightforward. The Primitive Methodist magazine for April 1851 gives an update by J Huff on the opening.  Although it had been started , it had been  left unfinished for want of funds; however, in 1850 an anonymous benevolent gentleman gave £10 to complete it.

Catshill Methodist church is still active and the church website gives further information.  It reports that “in 1831, the first Primitive Methodists met in a rented room in Barley Mow Lane in Catshill….From Barley Mow Lane the enthusiasts moved to Golden Cross Lane in 1851 when the first meeting house was opened in Vine Cottage, which still stands today just a few yards from the current building. It cost £95 7s 0d to acquire!”

The site gives further information about and pictures of the chapel built in 1866, a school room added n 1910 and the current church building of 1968.

Thanks to Dave Morgan, Senior Steward in 2020, for providing the pictures and the leaflet Catshill Methodist Church – a brief guide to its history