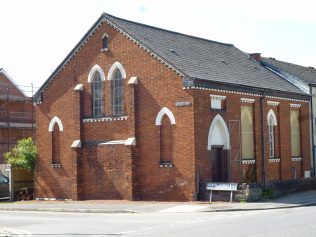 The 1883 Ordnance Survey map shows a Primitive Methodist chapel on Birchfield Road. Street View shows the chapel still in existence, but not used as a place of worship any more. In 2019 although looking a bit unloved and unused, it does still retain a carved stone with its denomination and date.

Thanks to Tony Jakeman for the 2014 picture of the chapel. He went there occasionally for Church services in the 1960’s as the ‘pastor’ (Mr Sanderson) lived next door in Headless Cross.  Tony thinks its denomination was some form of Welsh Baptist – and he would be interested to find out more about this.