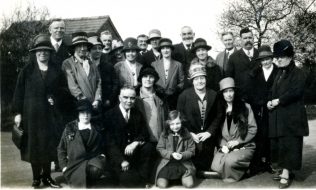 The Chapel was opened in 1880. An account appeared in the Worcestershire Chronicle dated Saturday 17 July 1880. The exact closure date has not yet been found, the Chapel appeared in the circuit schedule for 1967. There is now a modern dwelling on the former site.

The attached photo shows a group with some visitors from Worcester George Street, with Wadborough Chapel in the background. In the centre front row kneeling is the young Mildred Gugula (nee Beck) who has supplied me with all the Beck family details on Primitive Methodism in Worcester and Leominster where her father MW Beck and grand father WW Beck, were members.

On the 1885 OS Worcestershire 1:2,500 map the building is marked as Methodist Chapel (Primitive)

On the 1904 OS Worcestershire 1:2,500 map the building is marked as Methodist Chapel (Primitive)