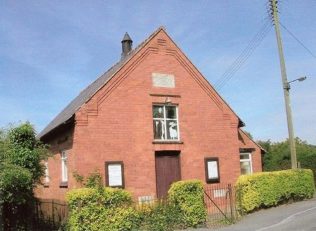 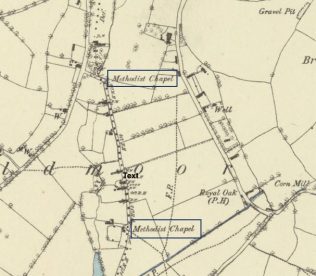 Wildmoor is north of Catshill.  The Bromsgrove Advertiser of August 7th August 2008 reports that Wildmoor Methodist Church would close on Sunday, August 31.  Although it still had members, none of them lived in Wildmoor.  Google Street View for July 2011 shows the chapel on Top Lane, still bearing the inscription “Jubilee Primitive Methodist chapel 1893” although the date is not clearly in focus.

When I first created this page I ended it by saying, “A chapel is marked on the 1:2.500 Ordnance Survey map for 1882.  Was this the same location as the 1850 chapel?  Can anyone throw light on this?” And the answer is yes. Trevor Bott has sent in the following, together with the picture and map.

The chapel design was by Mr. Ewen Harper of Barnt Green and Birmingham and the builder was Mr. Baylis of Belbroughton.  A memorial stone was laid on 9th October 1893

There is a note about the foundation stone laying in the Primitive Methodist magazine.  It comments that the society had been putting up with temporary accommodation for years

The Bromsgrove Messenger of March 1894 quotes – “A neat and substantial little Gothic building, 30ft by 19ft, capable of seating 120 persons. Cost about £300 including furniture”.

June 1893  –   “…….Wildmoor, an outlying village on the outskirts of Belbroughton village. For fifty years Primitive Methodism has had a cause in this neighbourhood, yet up to the present no building in which to carry on its work. For years it migrated from cottage to cottage as opportunities  presented themselves. For a long time afterwards a small room was utilised. Then the Wesleyans having withdrawn from the village the Primitive friends rented the chapel formally occupied by the Wesleyans. Now the work has outgrown its home, the premises are sadly dilapidated, and a persistent effort is being made to erect a building suited to public worship and the demands of modern Sabbath school work”.

15th March 1894 – “The proceedings opened with a brief service in the old chapel (see below), conducted by Rev. T. Clamp. At the close of the service the old building was formally closed and locked and the audience then proceeded to the new church where the architect (Mr. Ewen Harper) handed over the key for the first congregation to enter singing the hymn ‘Hold the Fort’. There was a large attendance, the chapel being filled.”

The chapel closed with a final service on Sunday 31st August 2008.

The 1851 chapel was located on Middle Road at map reference SO 959 756. The set of buildings is still called Chapel Cottage on StreetView in AUgust 2009.

Trevor Bott’s full account, together with further pictures are in the attached document.