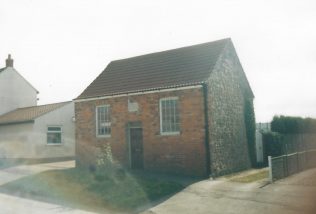 Victoria County History tells us that Primitive Methodists had a room at Atwick by 1851, and in 1856 they built a chapel (in the Hornsea branch of the Driffield circuit) there; the opening is described by William Burroughs in the Primitive Methodist magazine.

A cottage and garden was acquired by Rev T Ratcliffe who laid the foundation stone there on March 31st 1856. On Sunday, July 13th, 1856, the chapel was opened by the Rev. T. Whittaker. It cost £90 of which they borrowed £60 at 4%. Particular thanks were due to to Mr. Ratcliffe, for the land (valued at £5); “to certain of the trustees, for about fifty tons of stone, and all the gratuitous labour connected with it; to Mr. Garton, for the sand dug in his garden; to Mr. Hall, of Hull, for the inscription-stone, window sills, and step; to certain friends, for the pulpit cushion and hymn-book; to Messrs. Gartons, Robinson, Grange, Shorts, Smith, and others, for a great deal of labour, and lending of materials.“

It was said in 1865 that almost half of the families in the parish were nonconformist and in 1877 that most of the farmers and all of the labourers were dissenters. The Primitive Methodist chapel had been closed by 1932, when the building was sold;  it was later used as a house but was derelict by 1991.  However on Google Street View in April 2011 it had again been restored as a house.