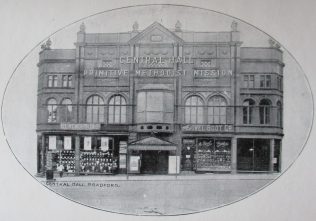 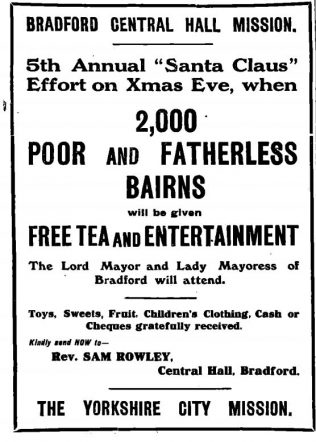 Central Hall Primitive Methodist Mission in Bradford was opened in on 31st August in 1892. It replaced Old Providence chapel which was also located in Kent Street.

Methodist Central Halls were a response to the needs of inner city areas. As part of the mission, they were in part intended to keep locals out of pubs by providing entertainment such as concerts and films. As well as large halls and meeting rooms, they often incorporated other elements such as shops which had the benefit of producing an income.

The initiatives were not always welcomed.  The editor of the September 1892 Primitive Methodist magazine reports the laying of the foundation stones for Bradford Central hall  but he is wary that “people rest with the attractiveness of the services. … (However) the intention in this Bradford movement is to make the services evangelical and soul saving, as well as attractive in other respects.”

The March 1893 magazine is much more positive. It reports that it had taken much work to have the adjacent graveyard de-sanctified and the bodies moved. The building would have ground floor business premises at the front to provide income to cover costs,  wide and easy entrance to a large public hall, with classrooms and connections to the school premises behind. Rev GP Clarke provided much of the energy and the motto was “Services for the people and people to the services”.

Hundreds of people had to be turned away from the Central Hall, Bradford, on Sunday, the occasion being the first annual band-day. The hall was packed in every part, the largest crowd ever seen in the hall. Four bands processioned along different routes to the hall, and then gave a musical programme indoors.

The chairman—an old bandsman—related how in a certain band one man played quicker than the others, and when he discovered that he had finished first, he threw up his hands and shouted “Hallelujah, I’ve beat you all ! In an appropriate address by another bandsman, we were told of a quack dentist who used to announce “painless extractions”; but he always had a band playing during the operation so that bystanders could not hear any stray moans or cries.

The value of bands at school festivals was emphasised. A great mass meeting was held at 8 p.m. on “Prohibition and Canada.” Rev. S. Rowley presided.

Bradford Central Hall was located where the current Jacob’s Well Council Offices are.  It was on the edge of the town centre just south of the junction of Manchester Road with Hall Ings between what was then Kent Street and Clarence Street.  The church is still on the Ordnance Survey map of 1958 but whole area has been redeveloped since.